Today we released the best bpmn-js version as of yet. We added tons of new changes such as modeling lanes, event sub-processes, data objects and default flows. On top of that you can now move connection segments in parallel. Under the hood some significant improvements make the BPMN toolkit feel noticeably faster and allow users to totally customize element rendering.

Lanes are implemented via edit controls on the parent. They can be added, removed and freely resized.

Try out modeling lanes in our online demo and tell us what you think.

A long asked for feature is the ability to move vertical and horizontal segments of flows in parallel. Connection move is now available in the modeler and makes sequence and message flow relayouting a breeze.

We added auto expand for elements, allowing you to model more quickly inside sub-processes and participants.

Keep in mind you can undo whatever change you did at any time. Just in case the behavior surprises you, once in a while ;-).

A new multi selection move allows you to move elements that do not share the same parent.

Together with auto expand, this feature makes it much easier to restructure process flows in bigger diagrams.

Conditional and default flows can now be modeled via a sequence flow's context pad.

And default flows work, too.

Some details on the elements:

bpmn-js does it's best in giving valuable feedback to the user. With the latest release the modeler indicates possible element changes that can occur when moving an element.

Try it out and learn about all the little gems hidden in the BPMN 2.0 specification.

As part of a bigger internal refactoring we added the ability to plug into the diagram renderering. This allows you to display nyan cats instead of service tasks or perform more useful things.

This opens areas for a lot of advanced use-cases such as displaying and editing entirely custom (i.e. non BPMN elements) along with BPMN elements. 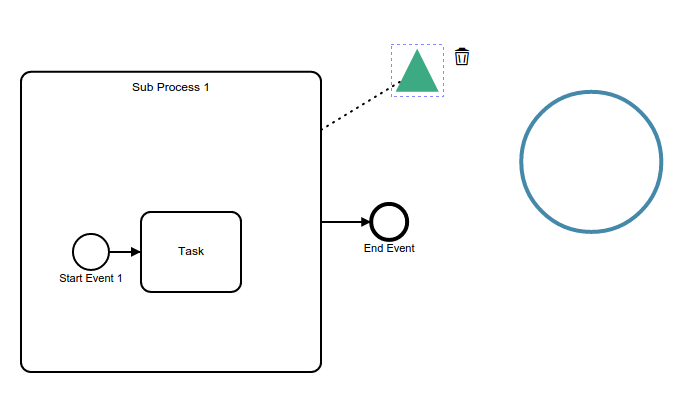 We created an example for this. Check it out if you also love custom elements.

This release introduced a few breaking changes related to the introduction of custom elements. If you implemented your own renderers, make sure to update to the new rendering infrastructure.

Other Things going on

A few other notable things that happened around our project:

Make sure to follow us on twitter to stay up to date with what happens in the bpmn.io sphere.

We started working on a desktop modeler based on bpmn-js. Look forward for a great offline ready BPMN editor with native operating system integration in the next month(s).

Do you like our latest modeling changes? Don't hesitate sure to reach out to us via Twitter or our forums and tell us what you think.

As always: Get the latest release of our BPMN toolkit via npm and bower.