This year, form-js joined our bpmn.io family. Besides that, we shipped numerous modeling and stability improvements in our core projects. As always, exciting things happened on the side-line, too. Great times to look back at what we have accomplished! Good times to take a small glimpse into the near 2022 future, too.

Early this year, form-js joined the bpmn.io project family. It also retrieved four minor follow-up releases and, with those, represents our minimal take on form editing and embedding, powered by bpmn.io. With form-js, we acknowledge that, along with BPMN and DMN, forms are an integral part of process communication.

Other focus areas were code-base modernization, improvement of standards compatibility, and modeling UX. Some noteworthy core library milestones we accomplished this year:

In the larger ecosystem, we made significant investments in two areas:

Significant work happened in one of the many underlying libraries that support our editing ecosystem. For example, we published 20 releases of diagram-js, each improving the way our core modeling UX works.

We cut more than 95 releases (more than 40 being actual feature releases) in over 30 libraries. To communicate the new and noteworthy in our ecosystem, we published five blog posts and sent out numerous tweets.

Similar to previous years, interest in our projects and toolkits increased substantially. More people visited our project website, asked for help, contributed to our forum, and starred our projects on GitHub. Community work led to several contributions, too, such as Spanish translations for bpmn-js and improved keyboard accessibility of our editors. 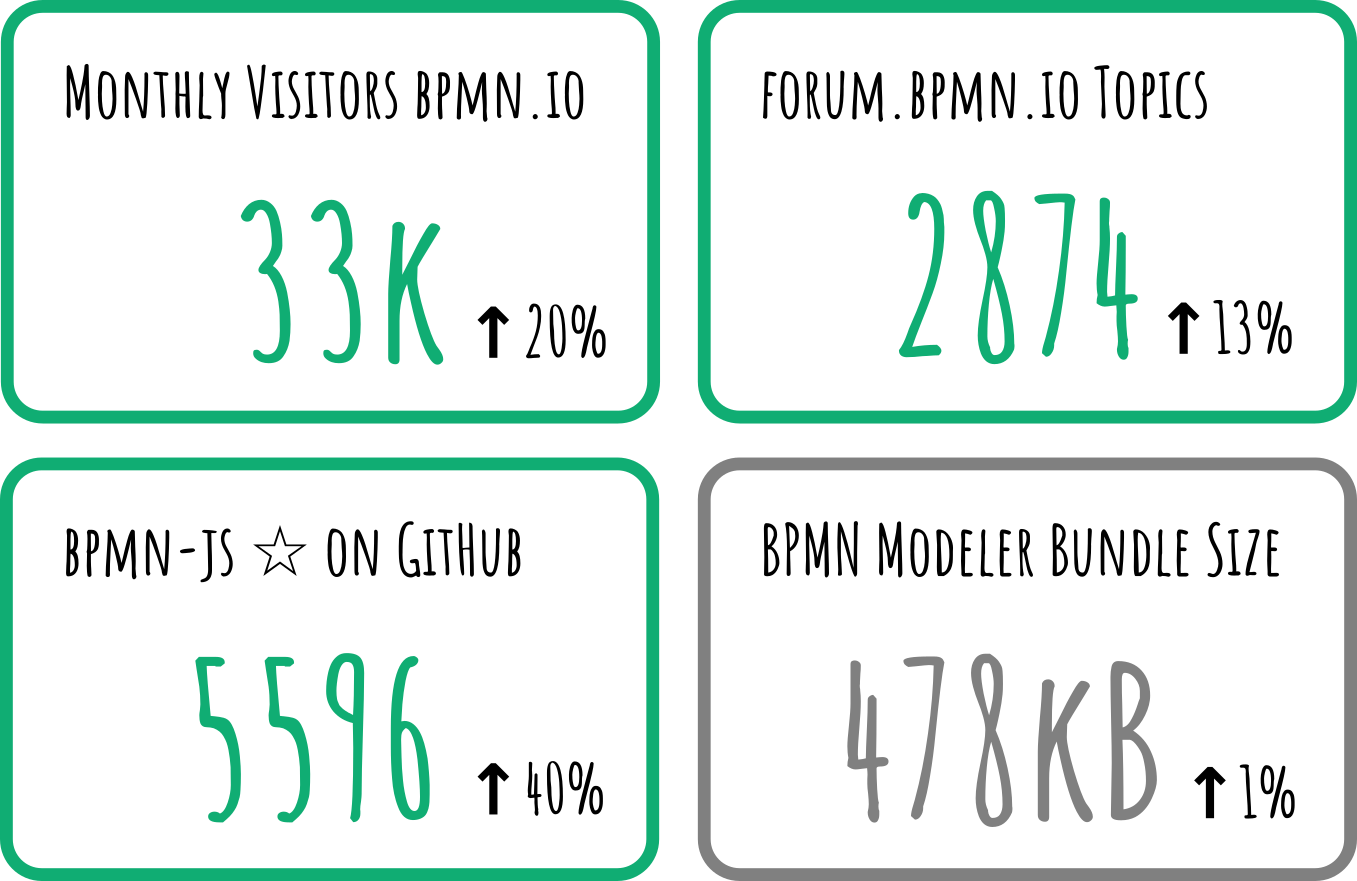 Newly implemented features paid a minimal toll with regards to bpmn-js bundle size. Roll your own BPMN editor to see that number shrink.

With two more folks on board in 2021, we are now a good team of seven developers dedicated to working on our toolkits and the core Camunda modeling apps. Head over to our about page to learn more about us.

Making great BPM tooling available everywhere, for everyone is a mission, not a task on a checklist. Our future could not be more exciting. So what is up next?

In 2022 we will ship a complete rework of our properties panel infrastructure, and new properties panels for BPMN, DMN, and forms. Async data loading will be easily possible. Promised

Further, an entire rework of our BPMN collapsed sub-process handling is in the works. You can look forward to powerful drill-down functionality coming for you in 2022.